Treasure Generator
The new treasure generator has been released! The new version of this popular tool uses a full suite of Dungeon Fantasy 8 data provided by the generous Brian Thomas and boasts some great options for generating the perfect treasure for your campaign!

Using the tool you will be able to choose what sort of treasure you wish to generate, as well as how many of each type and even limit the cost and maximum number of enchantments!

Generate loot like never before, check it out here. 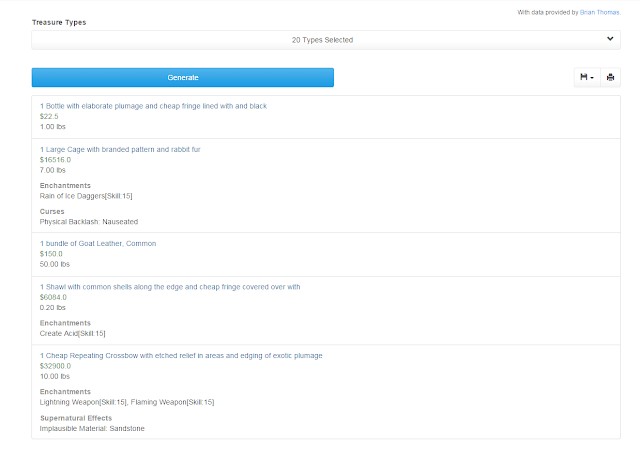 Treasure Generator
The current generator on the site is pretty awesome: it has lots and lots of handcrafted data by Weby, and it allows you to create a huge list of treasure based on desired wealth or encounter level. However, in spite of how good it is, it's never been based on actual GURPS rules or logic. Soon, that will all change.

Thanks to the dedication of Brian Thomas on the forums, GURPS Calculator will soon have a full set of Dungeon Fantasy 8 content available to it. I am currently building the UI for this data, and will hopefully be pushing it out next GURPS Day (2/11/2016).

This new Treasure Generator will give you the option to randomly roll any number of items from DF8 of random types, as well as specifically choose which types you'd like in your result set. The logic implemented by Brian includes the full suite of functionality in the book, giving you accurate pricing, enchantments, and effects.

GCS Importing and Character Screens
Recently I have been planning out a GCS importing project which will give users the ability to create a character in GCS and import it through a menu item (created by the lead programmer of that project Richard Wilkes) to gCalc. Users will then be able to use gCalc to roll vs skills, attacks, and attributes. Users will also be able to update their current HP and FP. Altering skills, advantages, and so forth will probably not be implemented as GCS does all of this wonderfully and I am not looking to reinvent the wheel. However, in a later release, it may become possible to add equipment and alter funds. Additionally, if a user imports a character they have already imported previously, it will simply update the current character on gCalc.

In an even further release I am planning on building on this GCS importing to allow character sharing, which will then make it possible to GMs and players alike to associate characters and monsters with a campaign. Once this is done, others in the campaign, specifically the GM, will be able to access the character and roll vs skills, attacks, ...etc as well as view current HP/FP, Equipment, DR, and so on.

This will be a lot of work, however, and require many many bug fixes, enhancements, and support tasks as the app matures and grows. Currently the GCS Importing project is slated to begin when we hit the $30/month combined donations mark on our Patreon. Please find the time to make a donation and help make GCS importing available for all!

gCalc is growing by leaps and bounds right now, boasting several hundred registered users and around 1,000 pageviews a week! Thanks to everyone that has helped make this possible, and don't forget to tell your friends about the project!

A friend of mine, Scott, is gearing up to start work on a Hiking Calculator which will include all RAW in Basic. A further update is planned to include the Romping rules from High-Tech. A date to begin development is currently not planned (he just had his third child! Congrats Scott!)
Posted by Unknown at 03:00 No comments: